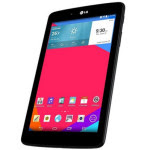 LG G Pad 7.0 LTE owners on the AT&T network who are dissatisfied with the default software may be happy to know that CyanogenMod now officially supports their device. The community has started to roll out fresh nightly builds, with one available as of now.

The file is for model v410, which is AT&T's version of the tablet. The nightly comes with CyanogenMod 12.1, which provides Android 5.1.

The full download sits at 252.85 MB. You can grab it below, and you probably don't want to forget gapps while you're at it.