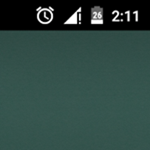 As the de facto flagship phone for Android (or at least that portion of Android that isn't covered in Samsung logos), the Nexus 6 gets an inordinate amount of attention. That's not always a good thing, especially when the hardware and/or software exhibits major flaws or defects. For example: a considerable number of users are reporting a total failure of their phone's mobile data connection. The problem is occurring on multiple software versions and across different carriers and locations.

Some Nexus 6 Owners Are Reporting Total Mobile Data Connection Failures was written by the awesome team at Android Police.